The Legend of the Winged Lion. 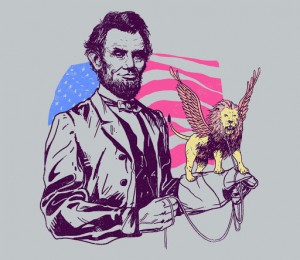 We may be a little late for Independence Day, but please consider this shirt featuring Abe Lincoln and his pet winged lion, his own proposed national bird. Of course, we know that the choices originally boiled down to a choice between the bald eagle and the turkey, but the winged lion was a crowd favorite for many since Lincoln was so famous for taking his tiny winged lion out on escapades and having it swoop down to catch mice and small cats in its tiny jaws for roaring crowds. For many, the winged lion represented America’s ferocious spirit and mythological standards of freedom. And Honest Abe would be the first to tell you that it’s a shame that his beloved pet never made it to the final round of death-matches that ultimately decided the official national bird. Some say it was distracted by the turkey’s wattle, some say the match was rigged and the winged lion poisoned. Whatever the case may be, the poor feline lost to the Thanksgiving dinner who in turn lost to the Bald Eagle. And the rest is history.