Tee Of The Week: Ri-damn-diculous 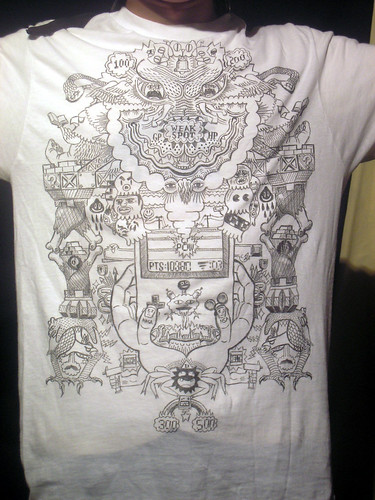 Ri-damn-diculous, originally uploaded by Ashley A.

This week’s TOTW was picked for one reason: the level of detail on the shirt. Now, some of you might be saying, “Big deal! Gimme a Wacom and a copy of Illustrator and I could do the same thing…”

Could you really? Probably. A little undo goes a long way.

But this shirt was drawn by hand directly on the t-shirt with a fabric marker by the talented Ashley Anderson. I’ll let that sink in for a second. The super-symmetrical design that you’re looking at up there was all done directly onto to the t-shirt — and it’s flawless.

The direct-to-shirt method means that there’s only one of these tees in the whole universe. So if you can rock a men’s small and need to have it, it’s currently selling for $150 on Etsy.

Steep? For most people, it will be. This is a wearable piece of art as far as I’m concerned tho — and if my fat frame could ever squeeze into it, I’d snatch it up in a second.