Hello Preshrunk faithful! If you saw Jason’s post a few weeks back, you knew that this awkward post was coming. You know, the one where I try to convince you that if you liked Jason, you’ll totally like me “because we’re, like, sooo similar.” I promise I won’t do that. 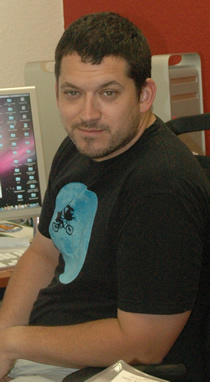 I do want to tell you a little about how I ended up running the shop here. First of all, I’ve been in the Preshrunk audience since almost the beginning. I’ve been a bit of a t-shirt fanatic my entire life, and buying awesome shirts online was an expensive hobby to begin with, let alone having to sort through all the crap out there. Preshrunk introduced me to flat-out awesome original shirts and to some amazing shirt companies.

I even commented twice. Once to agree with the idea that Preshrunk should have a MySpace profile (Don’t look at me like that. It was 2006, we were all doing it back then.) and a second time after I donated $5 to get rid of banner ads on Preshrunk. Mostly though, I just kept coming back for the great shirts.

It was a tough relationship though. Sometimes months would go by without even hearing a word. Then suddenly a post like this would make my heart go a-flutter in anticipation of new awesomeness.

When Andy from HideYourArms posted that Jason was putting Preshrunk was for sale, I had the sinking feeling in my stomach — I just knew that whoever bought it would ruin it, post a bunch of stupid shirts, plaster ads all over the place and generally take a big crap all over the site I’d loved for so many years. I knew what I had to do. I spent about an hour writing an email that wouldn’t make me sound like some crazed fanatic who was going to show up and lay down in front of the bulldozers. Which I would have done. In. A. Heartbeat.

Thankfully, it worked. Jason and I have spent the last month or so getting everything moved over, so that he can push his baby out of the nest and, with the help of fellow diehard fans, we can make it fly. :)