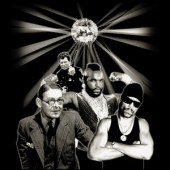 What do a Nobel laureate, B.A. Baracus, the Shat, and an O.G. have in common? I’ll bet my chain-wearing, alien-fighting, pale-rapping, poem-writing ass they’re here for the T Party. They’re T.S. Eliot, Mr. T., T.J. Hooker, and Ice-T.

Three out of the four are total badboyZ (it takes a man to cover Elton). But you’re probably asking yourself – why T.S. Eliot? Well, in addition to living abroad before it was “the cool thing to do,” I have a theory that T.S. stands for Tough as Shit. Theory goes it was a nickname Hemingway gave him. And that dude ate bullets for breakfast.

And if you don’t know who T.J. Hooker is, ask your dad.