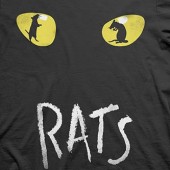 I remember fondly my days in choreographed street gangs. Coincidentally, strapping on Capezios and breaking out the pitch pipes right before a nasty rumble also struck a chord (do you see what I did there?) with Hollywood. but other than that, I’ve always found musicals to be a bit inaccessible. But then the people at Young Lovers found a way to reawaken my inner songbird. They made a joke out of cats.

Generally speaking, I don’t dislike Cats: The Musical. It’s written by T.S. Eliot, and has creepy cat-people prowling around (which is grade-A nightmare fodder). I kind of feel like going to Cats would be like watching a musical about a Furry convention. In other words, hilarious and kind of awkward.

The Rats tee brings the joy of song to the young people, and even puts a smile on this OG’s face. And they say musical theatre is inaccessible to the masses. Cynics.

See you guys later. I’m going to find Stephen Sondheim and get him onboard Furry: The Musical.