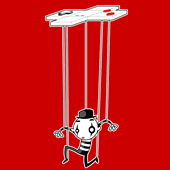 I had calluses on my thumbs from playing Contra for about 36 hours one weekend. That was the moment that I realized I was spending too much time playing video games.

In the 22 years since, I’ve only recently toned down my video game addiction, so I completely empathize with the Spanish mime that inspired this shirt:

Hikiko works as a mime on Barcelona’s famed Ramblas boulevard. It’s his way of making some money to pay for his “habit”… videogames. […] This addiction torments him night and day, and he often dreams that he’s at the controls of his trusty old Nintendo.

If you are a video gaming chick who feels the same way (and have 30 € laying around), go grab this shirt. Also, um, say hi sometime. ;)