It’s fun to use learning for evil 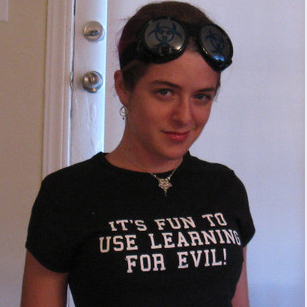 Whether you’re a mad scientist or just screwing with your cousin because you’re bored at dinner, this shirt should ring pretty true. Let’s face it – it’s nice to be on the surviving side of Survival of the Fittest. As people, sure. But we also won’t have our lives summed up as “He’s shooting fireworks out of his butt with the angels now.” And that’s a feather in our cap.

So embrace the learning. Celebrate every time you get a question right on Jeopardy. If only because it means Alex Trebek would be that much less of a jerk to you.