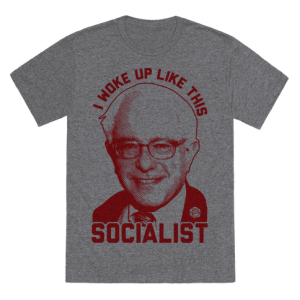 It’s primary season and it does not yet look very good for our favorite old man running for president. To be completely honest, I wouldn’t be mad if Hillary won instead of Bernie, but I really want Bernie to win. If for now other reason than because of his wild old-man hair. Imagine that hair flapping in the wind while he’s being inaugurated like the star-spangled banner flapping above him. So, anyway, whatever your politics, go out and vote in your primaries! And while you’re at it, buy a shirt to support your favorite candidate. ‘Cause, ya know, that can’t end up a bad decision at all. Some candidates have hats. We think it’s all about the T-shirts.