5 Shirts To Drink Green Beer With

Ya know what’s dumb? None of the other T-Shirt blogs I follow had special St. Patrick’s Day posts ready for me this morning. So here I am carrying the heavy burden of green beer all on my own. On this special drinking holiday, I present to you the five best green T-shirts I found in a Google search since there were none in my RSS reader. And I’m not talking about the lame, distasteful “Show me your shamrocks” shirts. I mean the clever ones that actually put a genuine grin on your face. The kind that let you know the wearer knows what’s up. Like this one… 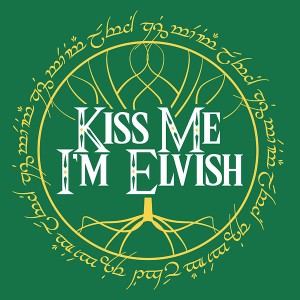 This fine example of a pop-culture mashup graphic comes from ThinkGeek, as you might expect. You wear this down at the bar and you yell loudly that you are a nerd and proud of it, but you can also probably drink with the best of them, and maybe get laid once in a while. And, after all, isn’t that what St. Patrick’s Day is all about? Also, you can get this shirt for FREE when you buy anything else for $30 or more today, so there’s that. 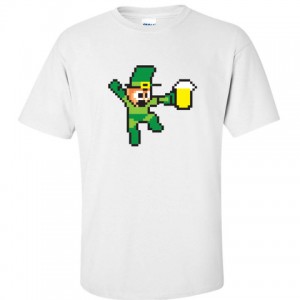 Don’t let their tiny appearance fool you, a leprechaun can drink you under the table. It has something to do with their speedy metabolism, I think. Also, they can turn their arms into bazookas and fire missiles at you. That’s a thing right? Yeah, sure. Let’s make it a thing. If it’s bothering you that the character on this shirt isn’t blue, then you’re alright with us. But c’mon, seriously, get with the holiday spirit.

This is My St. Patrick’s Day Shirt 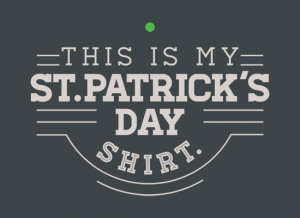 Some people just can’t get into the holiday spirit. For one reason or another they hate the color green so much that they’re willing to put up with the pinches. This shirt is for you bastards. Scientific evidence proves that even a small dot of green on your shirt is enough to prevent the former cheerleader in your office from reddening your skin with a flurry of awful pinches. Just don’t expect anyone to be happy about it. 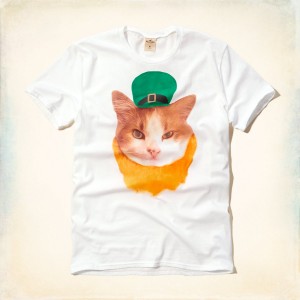 So, I’m not generally a fan of Hollister, but I am a fan of cats, so I’ll let the source of this shirt slide for today. Look at this kitty! He doesn’t look particularly happy that there’s an orange beard plastered to his chin, but that’s honestly part of what makes it so cute. Just be extra sure that his pot o’ gold isn’t buried under the kitty litter. Gross.

This shirt is on sale for what I assume is today only! If you don’t have it already, now’s the purrfect time to get it in preparation for next year! Also, sorry ladies, but this comes in guys sizes only, I guess. Although, that really shouldn’t stop you from either buying it yourself or stealing it from your boyfriend. 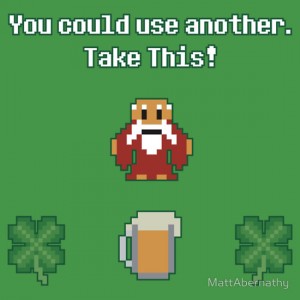 Okay, I know I already did a video game themed shirt, but, screw it, I like this one, too. At long last we know why Zelda was never really interested in Link despite his many heroic attempts to save her from harm. Turns out he’s the town drunk. Maybe. Or maybe this shirt is depicting Hyrule’s town drunk encouraging the Hero of Time to imbibe. In any case, there are shamrocks (not shamrocks technically, since there are four leaves, but let’s just roll with it…), so it’s St. Patrick’s Day in Hyrule and Link is gonna get tipsy whether he likes it or not. Hell, maybe Zelda will join him. LOL right.

Happy Saint Patrick’s Day to one and all! Drive safely tonight, or not at all, depending on your plans. In either case, be safe, happy and remember how that one guy drove all the snakes out of Ireland just so you could have an excuse to drink today.

P.S. — If you haven’t signed up for our gift card giveaway, now’s the time to do it!