The Savior of Hell’s Kitchen 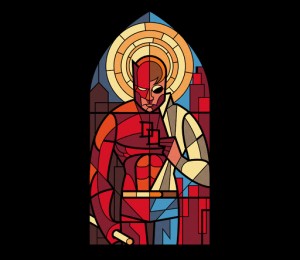 I love this shirt because of the classic religious imagery juxtaposed with the guy who calls himself the Devil. I feel like Daredevil was really underrated in the comics, and Ben Affleck didn’t help that. Here’s a guy who’s really just concerned with his neighborhood. He doesn’t really care about New York as a whole, but if it happens in Hell’s Kitchen he’s got your number. He sets reasonable goals. He’s not gonna go after an alien army or take down an entire government agency. He’d be happy if he never met Thor or went to another world. He just wants to make the area around him safe. By beating up anyone who threatens that safety. Thereby adding more violence to the equation… Whatever, don’t think about it too hard, just have fun watching the blind guy beat up professional mobsters in a Noid costume.