The Dogs Are Back 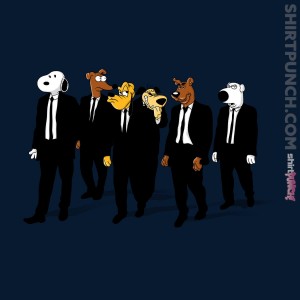 Let’s talk about the Goofy/Pluto dilemma, shall we? The dilemma is that Goofy can talk and is bipedal while Pluto is a pretty normal dog, if not a bit more intelligent. In fact, he’s presented as more intelligent than Goofy. So can we, in fact, say that Goofy is a more evolved form of Disney Dog than Pluto? Or is it just that Pluto doesn’t want to stand up, doesn’t want to wear clothes, doesn’t want to talk? Is Pluto a kinky mofo who wants to be walked around on a leash by a talking mouse? The image here suggests that Pluto is self-aware, confident, a leader. It also shows him walking on his hind legs, something that only half of this crew normally does. He seems like the kind of dog who would shoot Santa’s Little Helper’s ear off on a whim. Maybe Pluto lives two lives. One as a house dog, and one as a Reservoir Dog. Maybe Goofy wouldn’t last two seconds in the Reservoir Dog world. That would be my guess.