A load of claw-scratching fun in every chocolatey treat 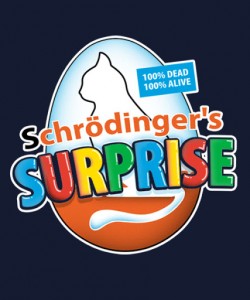 I’m a big fan of cats, so I’m not too big on the idea of one being dead. I prefer to imagine that the cat is alive. So I’d rather not look inside and discover that it’s dead. On the other hand, if it’s alive and I never take it out, it’ll eventually die of starvation. Unless it busts itself out. So I’ll make the box out of chocolate, and it’ll eat its way out. In fact, I won’t make it a box, I’ll make it an egg shape. Because why not? It’d be fun to watch a cat hatch from an egg. And unlike those Kinder Surprise things, you get a friend for life afterwards. Well… for as long as the cat lives. And they’ve got nine of those things, right? So it’ll be a while… I assume. Okay, maybe I don’t know much about cats. All I know is that Schrödinger wanted to kill one, and this shirt is awesome.