Sometimes You Just Can’t Get Rid of a Meme 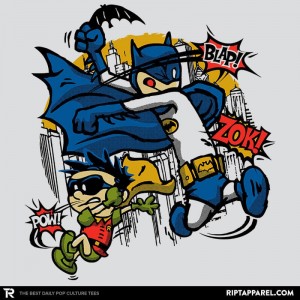 Batman is a cultural phenomenon. There are many different versions of Batman, and everyone has their favorite, whether it’s because that’s the version they grew up with, or because it’s the version with better cinematography. Drawing things in the style of Calvin & Hobbes is also a different kind of cultural phenomenon. Which is itself different from the cultural phenomenon of Calvin & Hobbes. Calvin & Hobbes is cool; I’m not quite sure how I feel about drawing everything in their style. It was fun for the first couple of times, now it’s getting old. Like, what is this T-shirt even trying to say? That Batman is Robin’s imaginary best friend? That Robin has a stuffed Batman that he sleeps with every night? …actually, he might… Anyway, if you’re a Batman collectible completionist, then wrap this cloth around your torso.