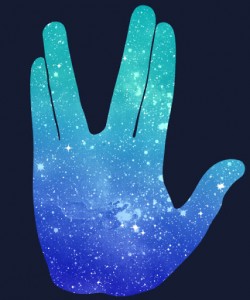 Ya know, I’m kind of glad that the late, great Leonard Nimoy was spared the shit show that is the year 2016. He got out before any presidential candidate announced their candidacy and never heard about gangs of clowns roaming the street. Still, though… maybe if he were here, he would be able to offer some words of wisdom. Maybe if he were still here he would be able to run for president. Yeah, I know, that would never happen, but can you imagine a real Shatner/Nimoy ticket? It would never happen since Shatner is Canadian, but still… Wrap this beautiful star field of a shirt around your torso to remind you of the great man who originally uttered the words “Live Long and Prosper.”