The Bad Boys Are Back In Town 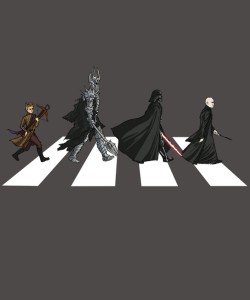 Can you just imagine all of these guys banding together into one group. Joffrey would be the first to die, probably at the hands of Lord Vader. I don’t imagine they would be doing a lot of singing, although Vader and Sauron have fantastic voices. Joffrey probably sounds like he belongs in a boy’s chorus and Voldemort smoked a few packs too many. So we’ll put Joffrey on the drums and Voldemort on the bass. We can make a band out of this group somehow. As long as Vader doesn’t mistake his light saber for a microphone, we’ll be good. Come to think of it, Voldemort could probably whip up a good amplification spell out of his wand… Wrap this cloth around your torso to live in the fantasy of an all-villain boy band.