Does It Hurt? Every Time. 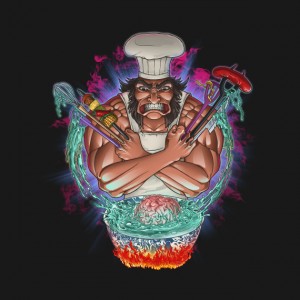 Rumor has it that Hugh Jackman is actually a pretty good cook. Which makes sense since he lives in the land of putting another shrimp on the barbie. Not Wolverine, though. He comes from Canada, where their most prized culinary possession flows out of tree trunks. Well, okay, I guess there’s poutine, too. But do you really want to eat something that sounds so much like the Russian president? Come to think of it, there have been many times where I’ve seen Wolverine’s claws used for food. Those things live inside his arms. Isn’t there some kind of sanitary rule being broken here? I really hope he cleans those things thoroughly before he serves anything prepared by them. Anyway, wrap this around your torso if you wanna eat out of Wolverine’s hands.