The Article Doubled in Size 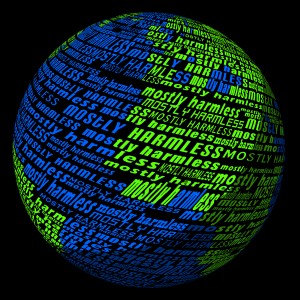 When Ford Prefect made his way to Earth to update its article in the Hitchhiker’s Guide to the Galaxy, he had no idea that he would bear witness to its destruction. And when you wear this shirt around town you’ll be blissfully unaware whether the next step you take will be your last. You see, when the article was updated from “harmless” to “mostly harmless,” it was because humans had learned a more advanced way of killing than just gnawing at prey. We had developed the atomic bomb. Granted, this was nowhere near as harmful as an intergalactic bulldozer, but it was still pretty bad, thus warranting “mostly.” And you have no idea when one of those things will fall from the sky and wipe you out. So wrap this cloth around your torso as a reminder that life is finite and you are mostly harmless.